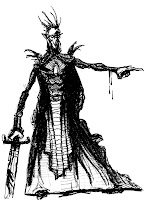 "Blood is life, life is sentience, thus blood is sentient. That which is imbued with blood, is alive."

Turn it into a set of game rules:

Every successful physical attack delivers to the surrounding area a splash of gore; whatever is coated in the bloody spray must make a d20 save equal or over the total damage done (for slashing weapons, halved for piercing and quartered for bludgeoning) or become sentient. The number rolled is then assigned between the six base attributes, and the newly aware creature gains the dominant attitude of the bloodgiver as a basis for personality.

Example: Schlork the Gouter cuts Edvard Sparkle in half with his slashing zweihander, doing 18 points of damage and showering the stone statue behind him with blood. The statue has a chance of becoming sentient; GM rolls a 14; the statue becomes sentient, with 14 points in attributes (say Str 5, Dex 1, Con 2, Int 3, Wis 2, Cha 1) and starts whining.

Then apply it to a setting... like a castle or a city or a region or a world.