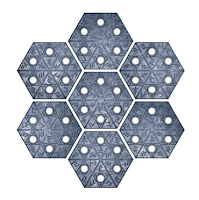 1. If you had to pick a single invention in a game you were most proud of what would it be?

The Hexlock Puzzle that turned up in my Secret Santicore entry. p30 I think. It's nearly 10 years old and I'd made up a decent hardcopy mounted on card and presented it to my players  once they'd stormed the wizards tower. Had them stumped, and I'd taken the bastard option and repeated the puzzle on the reverse in a different order. They'd been working hard at it for 10 minutes before someone turned one of the pieces over. Best jaw drop ever. They did solve it too.

2. When was the last time you GMed?
Just before Christmas.

3. When was the last time you played?
Mid 2010; wrapped up a Mutants & Masterminds alt-history supers campaign where Japan didn't hit Pearl Harbour so the Americans didn't get involved in the war... 50 years later, cyber Hitler is lording over the world from his base on the moon. Campaign goal? Kill Hilter. And I got the natural 20 punching him in the face. Icky.

4. Give us a one-sentence pitch for an adventure you haven't run but would like to.
I'm pining for some good ol' dungeon hacks actually... the dungeon bash would be an exploration of a sunken temple-thing, summoned from the deep, inhabited by evilfishmen for centuries, but millenia ago was actually a vast magick artefact designed to grant its creator immortality in a time womb thing - only it didn't work as planned - and there's lots of time/possibility hijinks and side-effectsto screw the players over with, as they try to get the temple-machine operational again, get back to their own time and stop the big bad from emerging from stasis.

5. What do you do while you wait for players to do things?
Engage; usually the fastest way to get them moving.

6. What, if anything, do you eat while you play?
I need brain food; carbs and sugary goodness.

7. Do you find GMing physically exhausting?
Nope. Emotionally sometimes, and mentally draining sure.

8. What was the last interesting (to you, anyway) thing you remember a PC you were running doing?
Same Mutant and Masterminds game as above; I deliberately built a hero that was designed to support others, and with the right point-buy I made a zillionaire who owned a private army stationed on one of the islands of the coast of LA. Just having an army at your beck and call was a totally different (and interesting) style of playing.

9. Do your players take your serious setting and make it unserious? Vice versa? Neither?
Any excuse for a laugh. But that doesn't mean they don't take the campaign seriously. We just have fun while playing.

10. What do you do with goblins?
Pull teeth out of their victims and make little goblin-baby rattles out of them.

11. What was the last non-RPG thing you saw that you converted into game material (background, setting, trap, etc.)?
That thar bowl of 13 frogs keeps getting into my brainpan. Frog season in Jez's head.

12. What's the funniest table moment you can remember right now?
The ongoing paternity issues for our drug-addled ex-secret operative in Star Wars who fell in with a bunch of amphibious cloners. They kept presenting him with man-frog halfbreed children from his DNA as pets. Spur of the moment thing that got a lot of mileage.

13. What was the last game book you looked at--aside from things you referenced in a game--why were you looking at it?
3:16 Carnage Amongst the Stars as inspiration for simplicity in game design.

14. Who's your idea of the perfect RPG illustrator?
Me of course :) Russ Nicholson... no, Miles Teeves!

15. Does your game ever make your players genuinely afraid?
Not in a long while, but then I haven't run horror stuff in a long while either. I think Kindred of the East was the last time I got genuine fear, back in Vancouver '05.

16. What was the best time you ever had running an adventure you didn't write? (If ever)
The Witchfire Trilogy for Iron Kingdoms. Great, great series. I added a bit of family background to the players that tied into the adventure as extra motivation, and we stuck with the game from beginning to end (and they failed to stop wassername from unleashing hell). Took about two and a bit years to play out.

17. What would be the ideal physical set up to run a game in?
I keep dreaming of a dedicated game room, well-lit table in a dark space, comfy seats, with a decent soundsystem and a flatscreen teev on the wall for the GM to show pics to the players on. Decent library on the walls; beers tucked away in the mini fridge.

18. If you had to think of the two most disparate games or game products that you like what would they be?
Mouseguard and Kult.

19. If you had to think of the most disparate influences overall on your game, what would they be?


China Meiville is a HUGE influence on my games and creativity in general, so that's right down the geek end of the spectrum.... down the other end would be the vast collection of National Geographic magazines I grew up with as a kid. So much cool stuff out there in the real world...

20. As a GM, what kind of player do you want at your table?
Fun, easygoing, enthusiastic, and can roll with the punches.

21. What's a real life experience you've translated into game terms?
My bad guys are usually motivated by love. They just take that need one step (or three) beyond what's acceptable.

22. Is there an RPG product that you wish existed but doesn't?
MUTANTOR!

23. Is there anyone you know who you talk about RPGs with who doesn't play? How do those conversations go?
A few people, my partner mostly, she's played once or twice but won't anymore; just isn't into it but gets it. When we talk it's usually about the story development or personality issues.