Great game. I ran it on the spur of the moment last week on G+, and it worked well enough that I'm willing to have a crack at running a campaign.

So yeah, if you're keen for something a little different, go here:

3:16 Carnage Among the Stars @ ConstantCon

You are humanity's only hope for survival. Don't fuck up.
Posted by Jez at 5:51 PM 1 comment:

Email ThisBlogThis!Share to TwitterShare to FacebookShare to Pinterest
Labels: 3:16 Carnage Amongst the Stars, ConstantCon 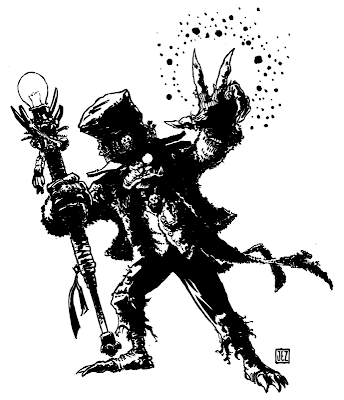 The final illustration of Cheroot for Trey. 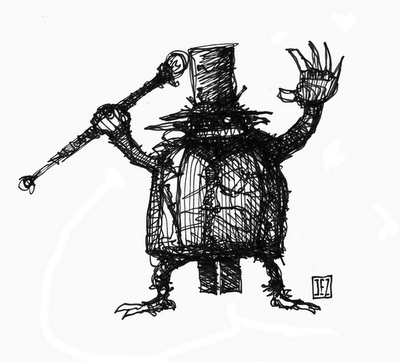 For Trey over at From the Sorcerer's Skull, a sketch of Cheroot the Hobogoblin!

Weeklings : Wizard in the Kitchen 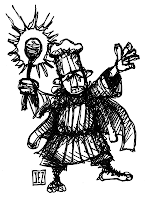 
"How about an illustration of a halfling chef wizard? He has a chef's hat and a ladle, and is chubby. He's my current PC, and cooks a lovely breakfast :)"

So yeah. Weeklings. Back in action, taking requests. Hit me.
Posted by Jez at 10:55 PM 2 comments: 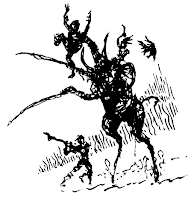 Sunday night I got to muck about in Scrap Princess' homebrew game, lovely to meet her and her creations. Very nifty. We were joined by Christine all the way from Germany, who'd traveled a hulleva long way to play her first rpg. But she sank her teeth in like a pro; and Scrap's friend John who hadn't played in ten years but was all over it.

We did chargen in half an hour or so using Scrap's mashup rules (a little bit Feng Shui, a little bit Pathfinder) and came up with:

and we kicked off as castaways on an island unknown, just up the beach from an upturned and half drowned river barge. Found the dying bargepilot from NewDawnFades in the shade of the the jungle's edge; turns out he was symbiont with the cutest little talking caterpillar hidden on his shoulder (Scrap Princess does a very excellent forlorn caterpillar impression). Said dude was brain dead, heart still going, and grub thing was gonna die with him. omg moral quandary! what do we do? Loot the barge. Well Hennowar does, and keeps all the best stuff for hirself. Fucking thieves. Unwittingly aiding her was Kalfur Jr, going off like a frog in a sock about something in the trees. Suddenly, Stilt-legged Pygmy Elephant!

Now gaming is one of those things where players like to get carried away and add a few details, like "We're on a castaway island!  Ergo, we must be starving!" which can cloud their vision and make Stilt-legged Pygmy Elephants look like hamburgers on toothpicks. So Kalfur goes all manhunter and runs off to kill us some dinner. Only dinner kicks his arse all over the beach; the collective might of three 1st Level characters sans spells or decent weapons aided by the unholy screech of the mud goose be no match for a slightly pissed off Twig-footed Trunkburger and we retreated, dragging an unconscious Kalfur Sr. and dumping him along side caterpillar man. Trunkburger rolled a 3 and decided to bugger off.

A brief discussion including the phrase "eat the mud goose" was enough to rouse the ghul, and it was decided that crabsticks are way better than trunkburgers. Campfire stories were had. Come morning and a fresh batch of spellikins for Durandu we sauntered off into the jungle looking for slightly smaller creatures with which to prove our killiness. First said creatures were man-eating crabs; fortunately they'd found three dead men to go to town on and were too busy to give us any claw action. The hombres were uniformed, booted, armoured and one wore a cutlass in a jaunty style through his skull. Divvying up the loot I discovered Durandu was quite the fashionista and that crocodileskin leathers weren't for him. All the good shit went to Kalfur, as is befitting a meatshield, though the poisonous munchrooms that induced rage and frenzy before death ended up in Durandu's pockets.

From there Hennowar climbed the trees: "zer are zez thingz flyink around ze pig in ze diztanz" and a tower. Simple plan: get to the peak, climb the tower and find out where we are. Suddenly, foot-long spikefaced maggot thing! That it went for Hennowar tells me she needs to wash more. Also, maggot-faced wolf thing! One girly scream from Durandu followed by a mouthful of arcantrixical verbulation and the maggot wolf lay slumbering at Durandu's feet, dreaming sweet dreams about how one day, when it grows up, its face was going to be a fly. The heartless bastard that was Kalfur shattered such youthful hopes and ran the beastie through. A lot.

And that's where we had to end it; two random encounters, a moral quandary, and a bit of looting. I know Scrap Princess was holding back on the weird, there was a new roleplayer to consider after all. Didn't matter. Good time had. Return customer fer shure. What happened to the caterpillar man?
Posted by Jez at 10:15 PM 2 comments: 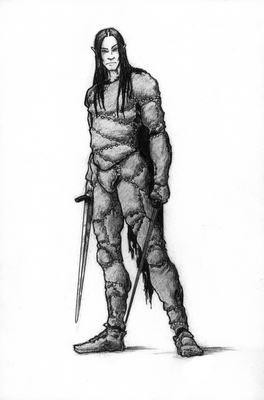 Moorcock has his Eternal Champion, but I have my Eternal Scumbag. Lurkio turned up in nearly every long-term campaign I played in, but this was his first incarnation as my archgrunge murderhobo, 90s style. Lurk was cool.
Posted by Jez at 7:36 AM 1 comment: 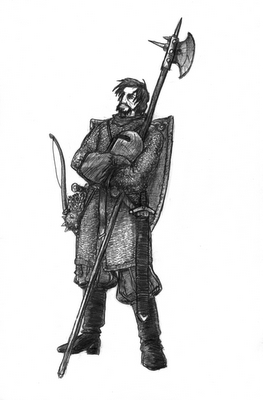 This here is Corbando, my old D&D2E myrmidon, name lifted from an obscure line in Shakespeare which in Spanish means "cut across the gut" apparently. Corbando was cool. 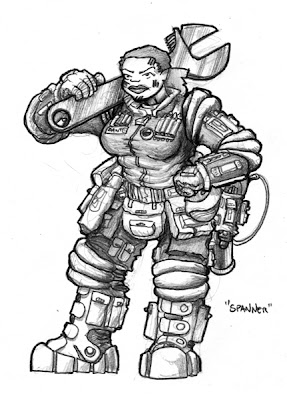 So I found me a bunch of old character portraits from the last 20 years. This one's from a short lived Jovian Chronicles game waaaay back when. V-something somethingrussian. Techhead obviously. Took shit from no-one. V-thingy was cool.
Posted by Jez at 7:56 AM 4 comments: