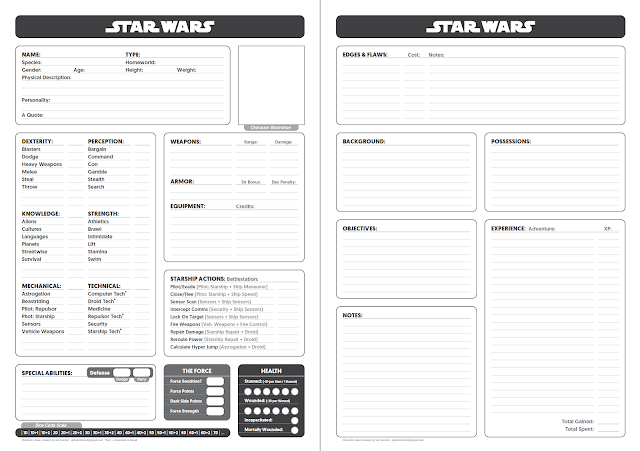 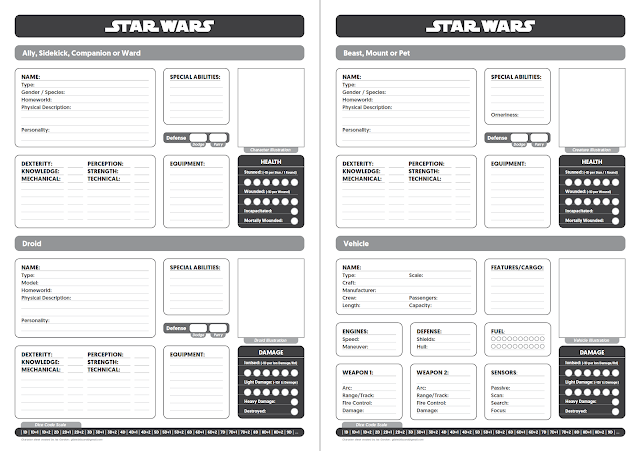 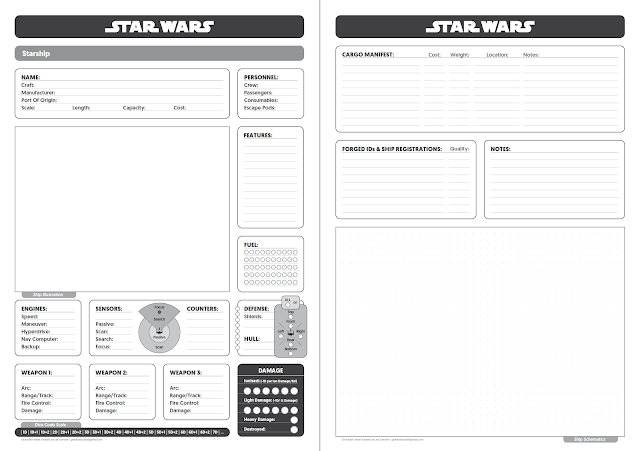 I've updated the custom D6 Character Sheets I use for my Star Wars RPGs to be fillable forms, to aid with online play. Included with the optional static Defense scores for fast play. You can get them here:

And the always-being-tinkered-with Star Wars D6 Rules Essentials you can still get here:

‪In a Star Wars RPG, if you were truly adhering to the tropes of the saga, would you remove player character death from the game? Or only allow “heroic sacrifice” where the PCs opt to die to ensure the mission succeeds, or maximum dramatic impact?

‪I’m just mulling it over for the SW Kids RPG which is on my mind. Like aside from Rogue One, the only “PC” deaths are from the big three at the end of the saga, or Kenobi. They’re all sacrificial deaths i.e. they willingly risked death for a cause.‬

‪The Rogue One team do so to get the Death Star Plans, Kenobi to allow Luke to escape, Han to save his son, Luke to save Leia and the Resistance, Leia (sadly forced) to something something not quite sure Ben Solo. They’ve all chosen their deaths.‬

‪I feel like if anything Erik Jensen's It Gets Worse Rules from Wampus Country are more applicable. In defeat Star Wars PCs should be captured, imprisoned, their ship taken, lose a limb, lose a family heirloom, they drop their shipment, lose their home planet...‬ 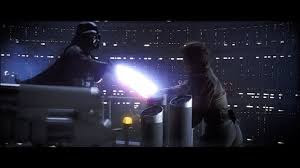 ‪Which opens up new avenues for adventure and character growth instead of shutting down the game for that player. Like I love the risk of death in my D&D games, it makes combat more thrilling and survival that much sweeter, but I just don’t think that it is the best approach here.‬

‪Especially when dealing with a game aimed at younger players. If they put their creativity into a cool hero only to be cut down by a stray Stormtrooper laser (it does happen to everyone else in the Star Wars galaxy) then you’re basically shooting down their creativity and fun.‬

‪So yeah I think that with this particular game I think that’s the approach I’ll be taking.‬

‪I wonder where L3-37 fits in this approach though?‬

‪Like she totally buys it in a rando shout out on Kessel. She’s fighting for A Cause (Robot Freedom) but it’s not like, if she was a PC, the player would have said I’m cool with sacrificing her at this moment. But they give her death purpose — and let her live on in the Falcon. ‬

‪Which is super creepy weird on one level, the idea that the Falcon is now infused with the persona of droid rights activist but is doomed to be an ownable, gamble-able, punchable object for the rest of her days, but also it lets her “live on” in the “game”.‬

‪Her demise gives the Falcon the navigational abilities that end up being put to good use (eventually) as the workhorse of the Rebellion and the Resistance. From an RPG point of view the character’s death furthers The Cause (in a very roundabout way). ‬

Anyway: character death in a Star Wars Kids RPG. Avoid, use It Gets Worse, or if somehow unavoidable make it meaningful. And if they are Force Sensitive give’em a chance to live on in spirit. They’ll be chuffed to see old friends again.

(Originally posted as a thread on Twitter, which is pretty useless. Blogs FTW).
Posted by Jez at 12:48 PM 3 comments: