SECRET SANTICORE 2012: Off and Racing!

All the requests are in, and all have been given to their Secret Santicore, so I get to suck daiquiris and club seals for a few weeks til they start rolling in.

Some design ideas for MUTANTOR!!!....

--- Make everything in the game unstable and under constant threat of mutation. The right combination of random will occasionally bestow characters with the ability to change the world around them. Not just the characters' freaky powerz, not the abominations that roam the land, or the twisting land itself, but the fabric of reality, and of the game. When that opportunity comes, the player chooses how much of their character they're willing to risk and sacrifice in order to change what they want. No idea if this would suck or be awesome.

--- Where possible get the players to do the rolling. I do like this idea. I know it's nothing new, but I'm intrigued by it. Less work for the GM is always good in my book.

--- With the "players make all rolls" thing in mind, instead of making constant calculations for each roll, simply rate each situation to see if the character is at an advantage, a disadvantage, or it could go either way (need catchy terms there). Then take that idea and using the roll 3 dice and pick one mechanic that I've been working on,:

It makes it really easy for the GM to make a snap call on the difficulty. Where it may encounter issues in the lack of bredth. A good swordsman against a peasant has the same chance of finishing them off as the greatest duelist in the world. In a rules lite game that... could work. In something more detailed, not so sure.

It'd be pretty easy to add a greater disadvantage: roll 3 six sided dice, and you only score if you roll a double or triple. And maybe if you're a a great advantage you could choose one of the 3 dice rolled and reroll it and hope for a better result.

--- The Arena. Going way out here, but say MUTANTOR!!! enters the world as a box set... it would be cool to have inside say the lid of the box is where all the dicerolling gets done. If it ISN'T player rolls everything, but player vs GM rolls, then the aggressor would roll first and the defender rolls second, with the option of hitting the aggressor's dice if they're scored a good roll. And with say the Greater Advantage idea above, instead of rerolling one of those dice, instead they get to add a fourth dice to their roll and can try and hit either any of their own duds, or try to hit their opponent's dice to alter their result. There's something really combative and bastardly about this idea... could be a lot of fun....

.... unless you were playing this online. There would have to be an alternate option for non-physical rolls (well non-shared physical space). 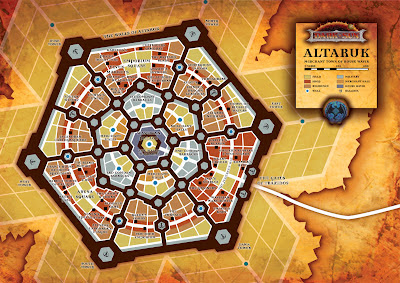 The freetown of Altaruk, from my Dark Sun campaign. I checked a fair bit of the source material too before designing it so alot of the names are legit.

The only thing different about my DS campaign was I set it prior to the hoohaa that went down at Tyr, and that I made the lizardlike Dray a playable race. You can't have this killer Brom critter on the cover and then tell the players they can't be one: 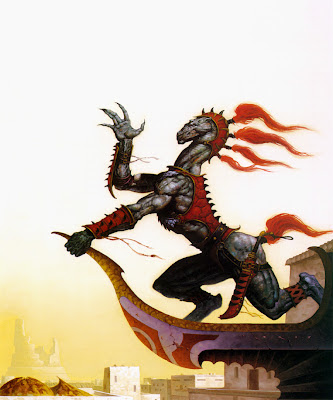 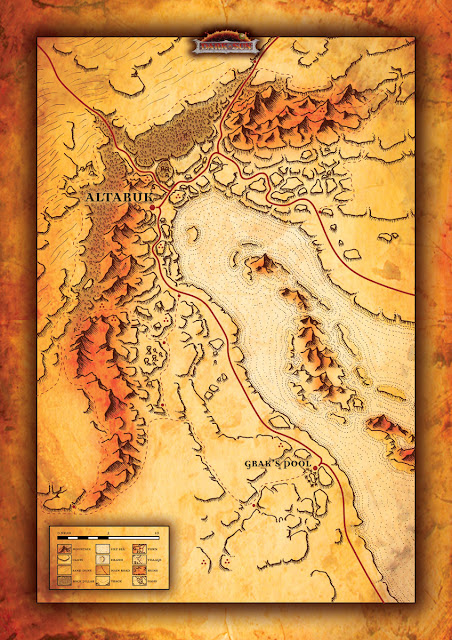 From my Dark Sun campaign a few years back.

Secret Santicore 2012 is here! From now til midnight Friday 14th September, Santicore will hear your pleas for succor and do his damnest to deliver!

Everybody who wants in click on the link below and fill out their request for some specific brand new campaign material--a new race, a location, a one-shot adventure outline, a random table, whatever. The idea is to be as specific as you need to be, but not too greedy (ask for a page or two of material).

Then I'll mix all the requests up and send them back out to the people who entered. Everybody gets the requests that weekend of the 14th-16th, and then they have til midnight Sunday 30th September to write up something matching the request and email it back to me. Only two weeks?! I hear you say? Last year everyone had two weeks and everyone delivered on time (nearly).I UPDATE: make that MIDNIGHT SUNDAY OCTOBER 7TH. I can be a little flexible, but do try to meet that deadline so that the frothing team of Santicore's Little Helpers can sink their chiseled fangs into it and ensure your gift can be included in the collected PDF that (Santicore willing) will be released just before the holidays kick in. And if you can't wait to share it til then, put it on your blog or wotnot.


• Be as specific as you need to be, but don't get greedy. Asking for a d20 table is cool, and a d100 table if you're lucky. but a d1000?--better let your Secret Santicore know that going that extra 900 miles is optional. Asking for a structure is cool, a whole mega-dungeon isn't.
• If you just want art or a map, that's cool too. This year thirteen artists and cartographers have been awesome enough to help out and I'll make sure your request goes to one of them.

• The original requester's name and e-mail address will be on the request unless s/he specifically asks otherwise.

• One request per person. Santicore likes the taste of people who break this rule.

• All human undertakings involving interactions between strangers involve a capacity for misunderstanding and idiocy. Secret Santicore is a gift horse. Do not look it in the mouth. No bad-mouthing people for what they ask for or provide. Serious and simulatory requests may get gonzo answers, gonzo requests may get serious answers, c'est la vie. If you're worried, try to be specific in your request so you get something you can really use.

• If you commit to something - a request, or helping out behind the scenes - then find you can't come through with the goods that's perfectly okay, life happens, as long as you let me know as soon as you know.

• None of this stuff should get used commercially unless the person who wrote it gets paid.

• I reserve the right to completely fuck this up, but will try very hard not to. If I get swamped with requests, it might be a little late. I'll do my best.

• On the tiny chance that I get absolutely hammered with a bazillion requests I'll have to limit the numbers to some arbitrary figure, based on what I think is possible to deliver within the time frame available. If it's just too big, I'll make sure that your request gets delivered via email, but I might have to limit the numbers on what goes in the PDF. Will reserve judgement on that one.

• Don't post your request in the comments below or email it to me. Use the form. Or Santicore will suck your neurons out your nose.

• Still got questions? Email me on malignicant at gee male dawt calm.