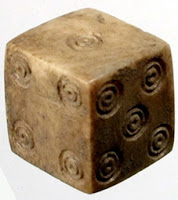 So while I've been ridiculously busy with illustrations my thinkmeat has been busy thinking about what to do once this project out of the way. And one of those thinks has been developing the Mutant Dice Engine I came up with a while back.

Have a read of the way it works in that link above; the new idea I've been exploring is different ways of reading the 3d6 roll. Currently it's 3d6, drop highest and lowest, keep the middle, unless you roll doubles or triples, which you add together. Doubles 1's are bad, triple 1's are worse. What happens if you keep the lowest roll, or the highest? Why would you?

Well the why is pretty straight forward, it's a measure of ability, now in three stages. If you're crap, keep the lowest dice; if you're good, keep the middle dice, if you're awesome, keep the highest.

What that does to the results is shown below: 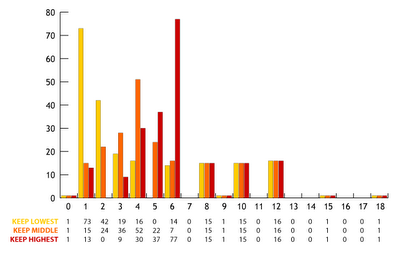 And when you group them together in bands of results (which I was looking at doing in that post linked above) you get this: 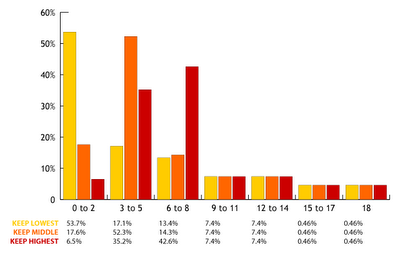 What is probably the biggest issue is that no matter what you're rolling you always have the same chance of rolling doubles and getting an extraordinarily high result. Looking at the top table, doesn't matter if you're keeping low, mid or high, you're going to be scoring a result higher than six 22.7% of the time; every fifth roll; you'll roll twelve or more 8.3% of the time, every twelfth roll.

From a simulation point of view this is problematic. The rookie has the same chance of succeeding at a very difficult task as the seasoned pro (though he's likely to stuff it up and result of zero to two 53.7% of the time). Doesn't strike me as very realistic.

From a gameplay point of view it's actually looking pretty fun. Even if you're totally crap, you have as good a chance at the unlikely shot as the awesome guy, and I can see that encouraging players to try things even though they might be crap.

My question is this... would you prefer something more realistic — say by not allowing "keeping the lowest" rolls to add doubles or triples together, which adds exceptions to the standard way of reading the rolls, something I'd rather avoid — or something that is unrealistic but encourages having a go?

As much as I love the maps in Rogue Trader, they reveal too much about the Koronus Expanse for starting characters. So I've made up this map to show the general known regions of the Expanse, and the Warp Routes the characters have access to; as they discover/pay through the nose for/stumble across/steal new routes and planets I'll add them in.