Something I knocked up over the weekend for Swords of Nordheim.

My sincerest apologies for the manglesmash of Old Norse.
Posted by Jez at 8:18 PM No comments:

Been a little quiet here, but only cause I've been busy hammer and tongs on Goreball!

Took the game for its first public playtests last weekend at the inaugural BezerkaCon in Sydney, which was a great motivator for getting the prototype up and ready and the rules refined enough for proper play. Also managed to get a few games in with my gamer crew in the lead up, so all up it's had about 10 playtests with others now.

A big thanks to everyone who took it for a spin, your feedback has been invaluable and I've spent the last few days tweaking and refining. I'm really happy with where it's heading.

What I've learned from the playtests:

• I suck at playing my own game. I haven't won once.
• Everyone really digs the look of the board and figures. Phew.
• Gameplay comes in a wide variety of styles, which is great. Working out which tactics are best is going to be fun.
• The playtests were only using teams of Kludgers — the allrounder position with the same amount of dice in every ability. That made it easier to teach the basics. I look forward to trying it with the full roster of positions available.
• I had a guy with fairly poor eyesight look over the board and the designs of all the positions and could separately identify everything. Good.
• People reaaaaaaally like hurting their opponent's players. This game runs on schadenfreude.
• People reaaaaaaally like picking up their own Goreballers with their Mauljaws and throwing them around the arena. Even when they splat.
• The Gore tokens are a winner. Ain't called Goreball for nothing.
• There's a lot of love for the Mauljaws. The moveable goal aspect is really popular.
• Mauljaws are really really hard to take down. But not impossible; once you get them on their back it's possible to pile on and with everyone and hurt them bad.
• I need to differentiate the two special Mauljaw attacks of ripping Goreballers limb from limb and just eating them whole. Mechanically and results wise they're too similar.
• It's taken a while to get the lethality levels right. Originally I had it so that injuring the Mauljaw, or injuring all the active Goreballers so there's noone in the Arena was a means of winning the game. That led to some heavy slugfests while the goreballer with the Gob hung out down the back,and once one team gains the upper hand numberswise its a death spiral. That's been changed now so that instead of winning you just score a point, which means that a passing game ends up being a more effective means of point scoring which is what I wanted.
• Falling off a pylon and critically injuring yourself as your opening move is hilarious.
• When the Gob explodes, it's a little less dangerous than I originally hoped for, and might need bolstering.
• It's possible for one team to have multiple turns in a row. There was one game where my opponent got three full turns before I could act. It didn't bother me in the slightest — I might have been to caught up in the playtest — but it could prove frustrating for certain players. I'll need to work that out.
• The biggest recurring issue was the bases for the Mauljaws. Currently I'm using the Pathfinder Pawns medium and huge sized bases. No real probs with the Goreballers (minor issues with bases being ever so slightly larger than the hexes but barely commented on) whereas the huge circular base placed over multiple hexes was confusing when it came to moving the Mauljaw around. In a perfect world the bases would be hex shaped to best fit on the hex board, and the Mauljaw bases would cover a 7 hex shape with its edge matching the outline of the 7 hexes. But no one to my knowledge makes them, and I really want to avoid going do the path of manufacturing unique plastic pieces for this game. Conundrum.
• The amount of dicerolling.... was a lot, but no one complained about it.
• The core rules seemed to be picked up by everyone pretty quickly.
• Teaching people how to play Goreball is exhausting!
• Teaching people how to play Goreball is awesome!

All in all, the playtests were great. 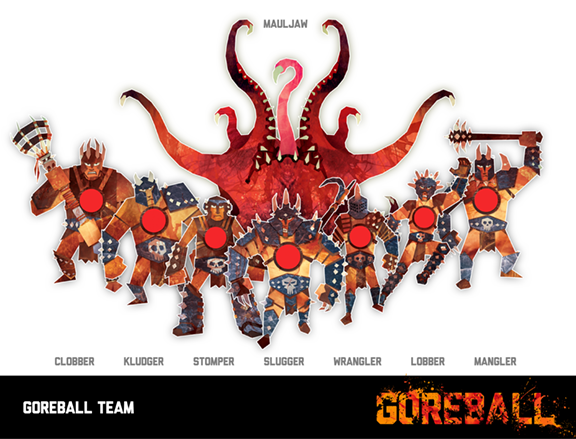 • revise the rules with all the feedback and playtest again.
• finish designing the female Goreballers (I had the Kludgers as 50/50 guys/gals. These things are important).
• finish the mutation tables for the Goreballers and Mauljaws, as well as work out more interesting equipment to be picked up from the stash drops.
• test the rules at higher levels of ability. Currently all the positions have abilities ranging between 1 to 3 (that's the number of dice you get to roll and your result is the highest die). I need to see how it plays when Goreballers have abilities between 4 to 6, and the Mauljaws (who currently attack and defend with 4 to 6 dice) need to be tested with 7 to 10 dice.
• once that's all done, and I'm 100% happy with how the core game runs, I need to work out rules for tournaments and league play.
• playtest the league rules.

and once that's done, I can start to look at production and distribution.