The Magnificent Joop van Ooms has been out for a little while now (with what I think is THE BEST RPG COVER ART OF THE YEAR by Jason Rainville) and I'm able to show some of the interior illustrations that James Raggi asked me to do. I figure it's also a good time to post a couple of the pieces that didn't make the cut. 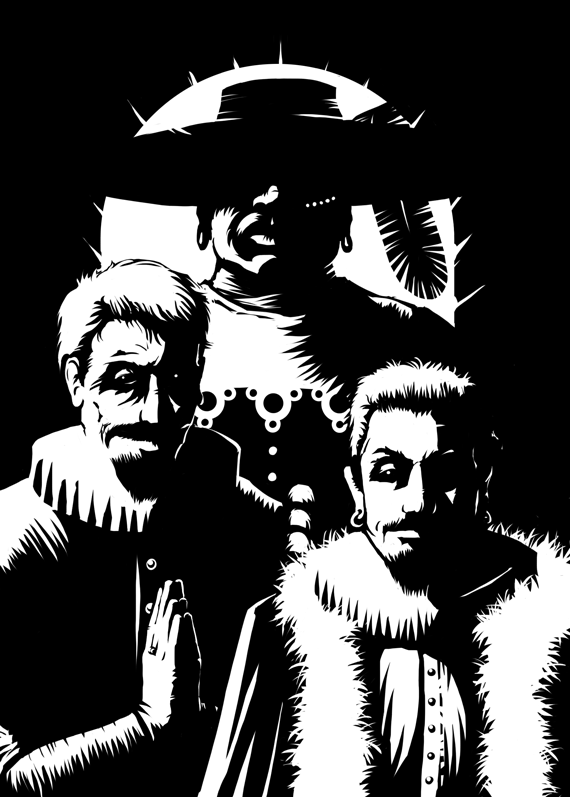 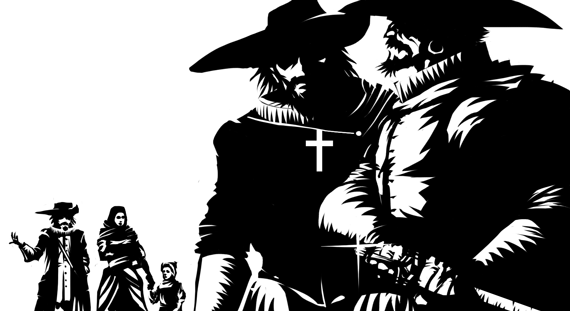 The next few pieces cover stuff that was mentioned in the book; late in the production it was decided to drop the page count, so these ideas - some close to the mark, some a little off - were left unfinished. 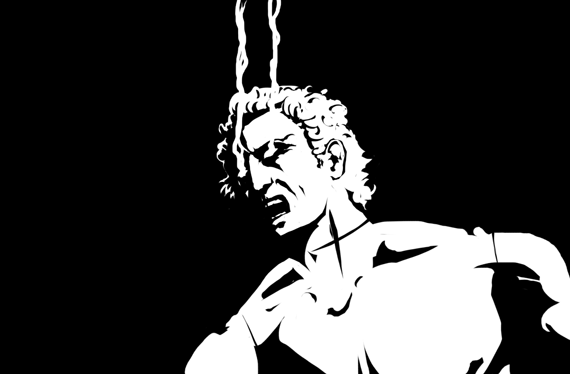 A statue from Joop van Ooms' collection. The steaming whatever from the eyes was a little too magical, and the space was gobbled up with copy following the page drop so it didn't get reworked. 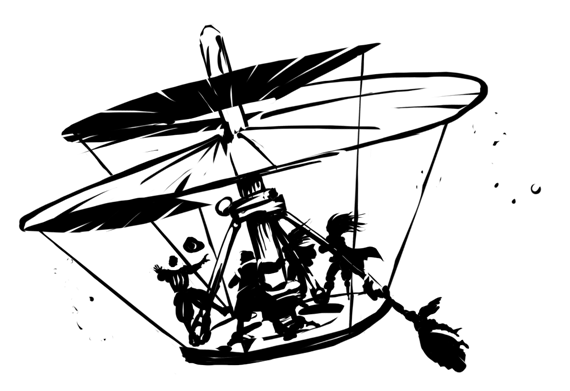 Joop van Oom's working prototype of Da Vinci's helicopter. James wanted something alot smaller and flimsier; I liked the idea of the characters lifting off from some ravenous crowd of heretic burners.

A rougher sketch of Oom's golden cannons opening fire. With the drop in page count this wasn't needed anymore and wasn't developed further. I did envision the sky full of Da Vinci choppers. Woulda been silly but cool. 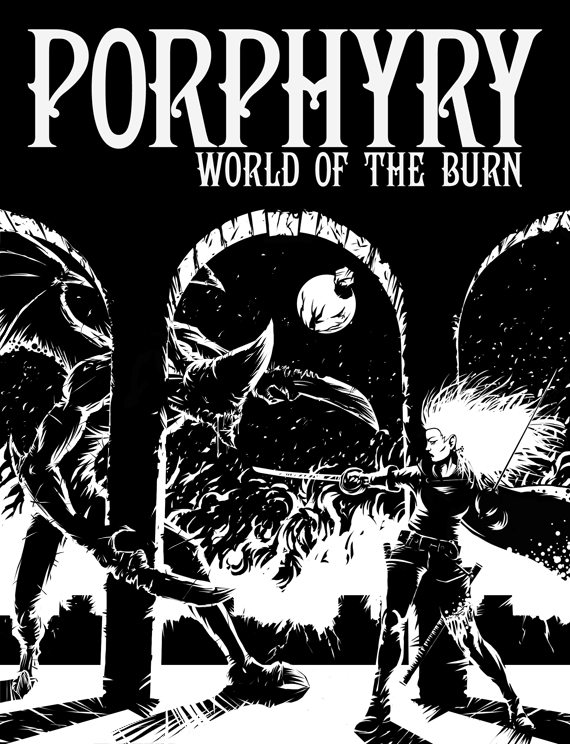 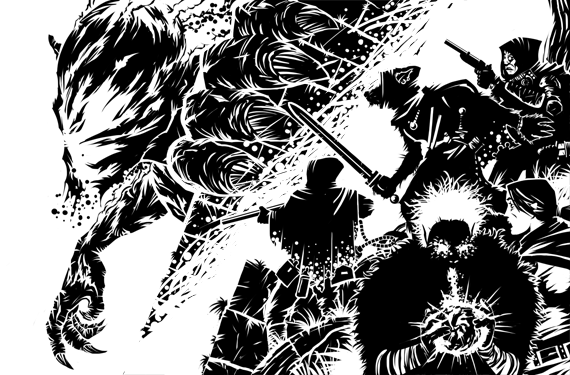 I sense something, something I've not felt since...

....well, since 1981. Back when I was 7, in the golden era after Empire Strikes Back and before the release of Revenge Return of the Jedi, back when I was in the middle of an epic Star Wars maelstrom, of toys and cards and afternoons full of action figures, of lunchtime re-enactments of the Battle of Hoth, of coloring books and endless drawings and recording cassette tapes of me reading my Empire storybook, stealing bubblegum cards off other kids and losing my whole collection when my parents found out... and through it all, this awesome sense of anticipation, knowing that it was only three years to go till we found out what happened to Han, till we found out what Jabba the Hutt looked like, till we found out if Darth Vader really was who he said he was...

...and I guess it was something similar, if a little less heartfelt, to how things were in 1999, pre-Phantom Menace. The anticipation for the prequels, how awesome they might just be. Lucasfilm sure knows how to make a good trailer; the Menace previews only stoked that fire.

And we were totally burned.

Despite how disappointing Phantom Menace and its sequels were, there is still much to admire about them. The production design, the creatures, the costumes, the choreography of the duels and space battles (take a look at all the duels across the entire series, the Maul v Jinn and Kenobi sequence is second only to Luke's confrontation of Vader in ESB). Technologically the prequels were outstanding. Organically they were awful. You'd think the guy who preached to us in our youth about technology and the dark path would have listened to his own lesson, but it wasn't to be.

And then this Disney thing rocks on out of the blue, and the promise to return to Star Wars on the big screen... and there she is once again. That sense of anticipation.

Knowing how disappointing the prequels were, how can I justify the feeling? Easy. The revisionist touch of Lucas will be gone. His circle of yes men will (hopefully) be gone. Fresh blood will be spilled on clean slates. And while they're at it these are the things I hope they consider when going about creating the new series:

• Don't pander to the fans: dropping the Jabba the Hutt scene into the reissues of A New Hope was bad enough - apart from being poorly done, it destroyed the foreshadowing of Jabba's presence throughout ANH and Empire... but worse, dropping Boba Fett into that scene, and have him totally break the fourth wall with his knowing nod to the camera? Awful. Please don't do it. Every cutaway to some throwaway EU character is a waste of time and pace. Star Wars fans will flock to this no matter what ends up on the big screen; use that opportunity to show them something awesome, different, revolutionary... something that builds on what's gone before, without obsequiously kowtowing to it.

• Drop the creative incest:  I'm not talking the Luke and Leia smooch. I'm talking the inverted nature of the prequels bending over backwards in attempts to link them with the originals. Annie built 3P0? Urgh. Yoda and Chewie were BFFs? Groan. R2 had jet-engines? Why the hell didn't he use them in the originals? Each one of those heavy handed links and retcons destroys the plausibility of the setting and make the Star Wars universe feel smaller and smaller when really it should be gobsmackingly grand. Finding out about Luke's father was enough. We didn't need to know about Boba's family history as well (you'd think the lesson would have been learnt after they showed us Chewie's).

Bascially you have a whole frickin' galaxy of awesome to mess with. Please please please don't take us back to Tattooine again.

• Give us mystery, not explanations: It's like a magician showing how he does it tricks. It kills the magic. We didn't need to know how the Force worked. And the clumsy way it was handled replaced mystery with confusion and disappointment. No more thanks.

• Less Jedi, more scum and villainy: And no cutsy shit like Ewoks or that double headed commentator from the Pod Race either (shudder). You showed us bodies burned to the bone in the original film. I was 4 when I saw that on the big screen. Seriously, I'm not scarred. We like bad guys.

• Give us complicated multifaceted characters, not cardboard cut outs: It really isn't that hard to do. Trust us, we can take it. We're not stupid and our kids aren't either. Han being badass and shooting Greedo before he even squeezed the trigger makes his evolution from cold hearted killer to good guy more powerful. Annakin in the Clone Wars series is waaaaay more interesting than in the prequels.

• Get experienced nobodies to play the leads (especially if you're not going to give them much direction): Otherwise it's just the junkie from Trainspotting hamming it up alongside the girl from Leon and mister furious vengeance from Pulp Fiction. At least with Hayden we had no idea who he was, and, like Mark Hamill and Harrison Ford when we first saw them, they had no cinematic baggage along for the ride.

• Get seasoned hacks to anchor them in support roles: It worked with Sir Alec and Sir Christopher, and let's be honest, you frickin' owe it to Mark Hamill to resurrect his acting career after it was sacrificed on the altar of Skywalker (seen Slipstream? he was good in that). Obviously it's going to be about the Skywalkers anyway, so seeing Luke go all Unforgiven would be cool (and it's ok to pander to the fans on that one point).

• Less is more: There's a reason the actors from the prequels complained about excessive use of greenscreen. They hate it, and it shows on the big screen. But if you're going to insist on it, take the time to get it right (like Peter Jackson did).

• As much as you'd like to blow gazillions on the effects, blow it on the script instead: Seriously, get the best. I'd much rather an awesome story with great dialogue, plot, and characterizations instead of MOOOOOOAAAAAARRRRR CGI. We know Lucasfilm has effects in the bag. Disney and Pixar have some amazing writers on tap. Pretty please, use them.

So yeah, I'll be there in 2015 with my then 7 year old and 5 year old boys, full of anticipation that this will be the start of something golden, and as long as Disney does these things, these new Star Wars films should totally rock. And honestly, what I've thrown up there isn't that hard to do, especially when you have the bank balance to back this up and the audience that Star Wars guarantees.

So please don't stuff up... otherwise you'll end up with things like this...