SUMMON MAN RIDER
Can be summoned whenever any Summon X spell is cast.

School conjuration (summoning) [see text]; Level bard 1, cleric 1, sorcerer/wizard 1
Casting Time grab the two nearest dice, roll'em and subtract the lowest result from the highest. that many rounds. that or how ever long it takes for me to wrap up whatever I'm doing and plug in.
Components V, S, F/DF (an offering worthy of Akayle Ozph)
Range a party member close by (25 ft. + 5 ft./2 levels)
Effect one summoned Man Rider
Duration until I have to get back to work or grab a kid.
Saving Throw none; Spell Resistance no

If the caster can communicate with Man Rider they can ask him to attack particular enemies or perform other actions. While Man Rider will try to act in the best interests of whoever summoned him, he is an avatar of chaos and may prove somewhat unreliable and is prone interpret requests in strange and peculiar ways. He won't fuck you over though. Maybe.

As a summoned creature Man Rider cannot summon or conjure other creatures, nor can he use any teleportation or planar travel abilities except to return to his lair in the Snails Quarter when he's got to bail. Also, Man Rider can't be summoned into an environment that cannot support him— there must be shoulders available for him to mount, and no frickin' lava.

Man Rider is currently a 4th Level Paladin of Chaos, CN in alignment, has detect order instead of detect evil, and gets a cut of XP for any deeds performed while summoned.

*Totally depends on whether I can spare 20 minutes when you message me, but if I'm free I'll drop in to whatever G+ game you've got going. The caster MUST announce they are cast this spell before checking to see if I'm available. If I can't make it the spell fails.
Posted by Jez at 10:23 AM 2 comments:

Reposting from G+: it's not often you get four products you're involved in hit the market at the same time, but yeah this happened:  A Thousand Dead Babies by Zzarchv Kowolski (illos, maps, design), Qelong by Kenneth Hite (maps, design), Secluisum of Oprhone of the Three Visions by D. Vincent Baker (design, some maps), and Fuck for Satan by James Raggi (some illos, maps, design) all came out in the last coupla days. Go get'em folks.
And while I've got your attention, go snaffle up Porphyry: World of the Burn by Kyrinn S. Eis (illos, maps, design), and keep me warm and fed. Pick them up here:
A Thousand Dead Babies
http://www.rpgnow.com/product/110659/A-Thousand-Dead-Babies?src=s_pi
Qelong
http://rpg.drivethrustuff.com/product/117257/Qelong
Seclusium of Orphone of the Three Visions 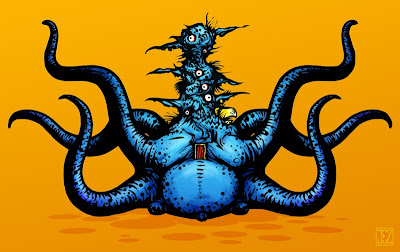 Man Rider says: Whatever you do, don't Flailsnail.

PORPHYRY: WORLD OF THE BURN Now in PDF! 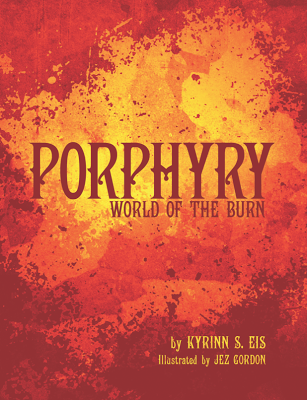 PORPHYRY: WORLD OF THE BURN is now available on PDF at drivethrurpg.com.