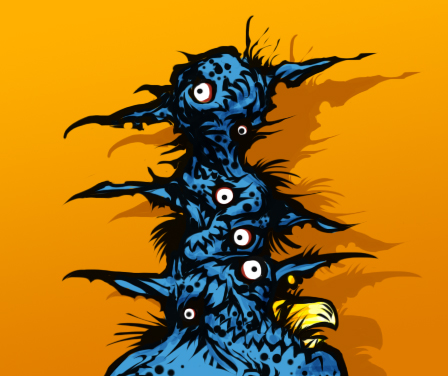 Some thoughts on funnel runs.....not that I'm an expert on them, and I've only read through a handful of modules, but I'm starting to get some very clear ideas of what I think is needed for a really good one, and some house rules on how I'll do them from now on.

Or dwarves. Or halflings. Racist? No. Looking for a richer gaming experience? Definitely.

Three reasons: the hook for zero level funnel runs is that up til this point in time, where your four little zeroes cross the threshold into that first dungeon, they have had miserable, pointless, banal and bathetic lives of drudge and toil. The motivation for entering the dungeon is the chance to leave all that behind, to escape the quiet horror of the slow death. As soon as you add elves and dwarves to the mix, you're already making that prior life just that little bit more magical, something different and otherworldly. Elves and dwarves kill that grinding mood. Also, especially with elves, if they lived this grim life prior to adventure, where the hell did they pick up that mithril sword they get at 1st level? Wouldn't you take it into the dungeon with you?

Secondly, consequence of play: cause DCC opted for race as class, there is no surprises in store for elves, dwarves, and halflings. As long as you make it out of that funnel run alive, there is no class choice to be made. You are what you are, which for me means a lot of the game play is diminished. There's no need for these three races to go looking for wizard tomes or the lost artefacts of dead religions, or finding the holy weapon or even stealing the jools and sneaking about real quiet like. These demonstrations of class leanings have no meaning for elves dwarves and halflings. Humans on the other hand, and the players that have an idea of how they want to steer them, must desperately search every room for the arcane source that will impart the eldritch teachings to their wannabe wizard. They will send their guys with the beefy physical stats into the front line, armed with whatever rusty weapon they can find; they will hold their weaker zeroes back, sending their little 1HP guy in only when there's a clear advantage, a kill steal or a backstab to put down the horror they're facing or hurling assorted pieces of gear into the fray from a safe distance. They'll send their smartest zero into translate the dusty runes, and their most personable zero in to deal with the talky stuff. Human zeroes get the chance to show their potential, and demonstrate their proto-class. And most importantly for the characters who survive, their players get to make the decision about which class the survivors pursue.

Human characters gives the players far greater meaning to the decisions they make and the consequences of their choices.

Lastly, darkvision. You take a bunch of humans and drop them into a pitch black dungeon, you automatically have fear, you automatically promote resourcing as they scramble to get their source of illumination sorted, you give the denizens they face a clear target to kill, and force the players to choose which character is brave enough to carry the torch. As soon as you add a character with darkvision you kill all those possible sources of tension, which to me is a shame. A funnel run is meant to be the scariest fucking thing these zeroes have ever done. Darkvision kills the scares.

Again, running with the notion that the zeroes' lives up to this point have been banal and dreary, I strongly doubt they have had the opportunity to side with the Forces of Law and Chaos. They might be good people, or bad, but most likely vaguely law-abiding, free-willed and occasionally selfish like the rest of us. You'd have a hard time convincing me that most zeroes are anything but Neutral.

So a funnel run that contains events triggered by characters of a particular alignment are wasted on me.

The events within the funnel run that favour a particular alignment should be triggered by what the players choose then and there, a direct result of player's actions.

Ideally, there should be several situations like this that will help harden the players' alignment leaning for their characters. And for those characters who survive, the Judge and the player can examine how the characters behaved and now have a much clearer idea of what alignment they should be given.

Running with the notion that the funnel gives human characters the chance to demonstrate their future class in play, there needs to the opportunity for each future class to evolve.

Future warriors are sorted here. They're guaranteed a good fight, and that which doesn't kill them will usually cough up good weapons and armor to loot. Anything that requires Strength checks allows them to demonstrate their physical prowess. The guy with the biceps holding the collapsing stone door open for the others to escape through? He's the fighter. Judges should keep an eye out for players constantly trying to use their surroundings to their advantage in combat, cause they're the kind of players who'll get them most out of Warrior's Mighty Deeds ability later on.

Characters destined to become thieves need situations that provoke roguish activities. The chance to disguise themselves as one of the enemy and move freely among them, the chance to take advantage of the shadows and cover that the environment provides to ambush their foes, or demonstrate their high Agility by providing dynamic dungeon settings that require balancing, climbing and nimbleness to access key features or rewards. Any player worth their weight in salt should be able to spot these opportunities and try to make the most of them, as long as those opportunities are there. A dungeon made solely of passages 10' wide and regular shaped rooms is a poor proving ground.

Proto-wizards need to find at the very least one source of arcane power that will be the catalyst for their journey along the path of magic. Preferably two, if you have players with an eye towards wizards who also want to stand apart from each other. (Quick aside, looking forward to running a DCC cabal where all the characters are wizards). Ye olde tome of spelles is the default, but a good funnel run should have something far more unique and imaginative. See Snakes as Books for a brilliant example. A means to communing with a possible patron, or free one from its prison, or (if you're a bastard Judge who doesn't automatically level up funnel runners who survive their first dungeon) information about where a patron might be found, along with urgent reasons to go there (so that, at the end of that second adventure, the wannabe wizard has the means to become a full-fledged one). You also want opportunities for characters with reasonable Intelligence to shine, but not in a dry and dusty manner. Translating the mysterious runes to learn a secret about the ruins you're in is one thing. Translating the mysterious runes that hold the key to your imminent death as the trap is activating? Much more exciting.

Aspiring clerics.... I find them the hardest. There's no occupation in the DCC list that indicates religious leanings, so a good funnel run needs to provide the player with an opportunity to learn about and then connect with the divine. But a Finger of God moment reaching down (or up) to bless the character is a Big Deal, the kind of thing that will alter the perceptions of all the characters and not just the one who wants to be the cleric. And there's the other thing. How do you know that the character who makes the connection is one that the player wanted to turn into a cleric? It's a tricky balance, but a good funnel needs to provide the opportunity for aspirants to volunteer for the divine contact without making it essential to successful completion of the funnel. And like two wannabe wizards, if you have two aspiring clerics, and they want to worship different gods, you need to provide multiple opportunities. A solution is to provide an opportunity to contact a particular pantheon of gods, but with different individual deities for different characters. Also note that having a cleric in the party will have a very big influence on the directions and adventures the party undertakes. Two clerics of opposed deities are going to make for a difficult game for the Judge. Lastly, especially when using prefab modules, you need to make sure that any divine opportunities and deities fit within the cosmology of your gameworld.

THE ONLY WAY OUT IS THROUGH
You need to lock your zeroes in the dungeon. As soon as they realise they're in over their heads, they'll want to (wisely) run away and find someone more capable or get better gear for the job. Nuh uh. This is about forcing the zeroes to rise to the occasion. If they can get out before it gets rough, they won't rise, they'll dribble away.

This is total self promo here, but I've used my Weird Urban Occupation List for four different groups of characters now, and every single time the players have chosen to base their characters' personalities on this list. It's weird, some of it I have no idea what it means, some of it's a bit ewwwww, but it always provokes good reactions from the players as they read out what occupation they got. Plus the unusual equipment has always provided a good laugh. Decapitating a zombie with a dead cat is win. Basically there's no way I could use the original DCC occupation list now. Just too dull.

If you want 4 Zeroes from that list ready to go, just click the link below to go to Purple Sorcerer's autogen:

Not at all. If you want elves or any other non human race, just let any player who didn't make it through the funnel run with a character to spare include non-humans in their list of options. Or, if you feel like that's rewarding someone who shouldn't be, let the players unlock alternate races by exploring regions of your campaign where nonhuman reside. Been to the Little Lands? Sweet, now halflings are on the table. Been to visit the Molten King of the Iron Core? Dwarves are now available. And so on, depending entirely on what races you're going to allow. Reward good interaction with your world with more options for your players, and they'll keep exploring.

Email ThisBlogThis!Share to TwitterShare to FacebookShare to Pinterest
Labels: DCC

New Feierland is the most horrible place in the universe, and my favourite place to go adventuring in. It's run by Trent B on G+, and while playing it I've witnessed some of the most hilarious situations and unfortunate deaths, usually at the same time. Hopefully Trent will make it available to the masses at some point in the near future. It's too good a game not to.

Anyway Lame Jimmy Headshot Groinstab --- deftly played by Reece Carter --- got himself killed, and the question of reincarnation came up.

Someone on the DCC RPG G+ community
wanted a blank map for folks to co-create. Muse bit me. Here you go: 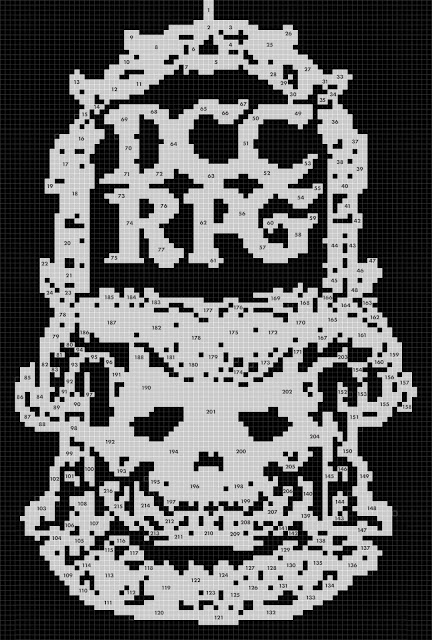