When I ain't playing RPGs I'm a passionate astronomer, so world building a celestial cosmology is like crossing the streams for me. Imagining what it would be like to live on a world with two moons, what that would do to geography, the oceans, eclipses, the night, how two worlds in the heavens might inspire or terrify... that sort of thing is my jam. So forgive me if I go a little overboard with this stuff. 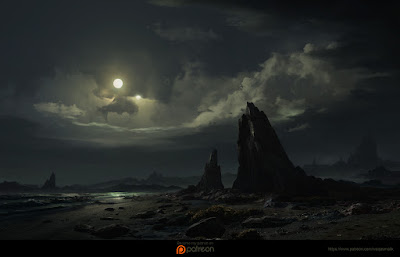 The Sun: Zul, the Brilliant Star

The First World: ..... Varca, the Desire, gold with lust
The Second World: ..... Garn, the Fury, red with rage
The Third World: ..... Arkha, the Wandering Home, where you live
– The First Moon: ..... Rindat, the Threat Unseen, small, pale, and riddled with mysteries
– The Second Moon: ..... Lumin, the Threat Expectant, large, silver, and shrouded in dust
The Ring: ..... The Rings of Ui-garn, the world that is no more, scattered like the dead
The Fifth World: ..... Hri-nah, the Shame, burning with failure
The Sixth World: ..... Shar-nah, the Regret, blue with misgivings
The Lost World: ..... Karn, the Exile, unwanted, unwelcome, and not seen for centuries

The Comets: ..... The Messengers of Hail, harbingers of tumult and change

The Stars: ..... Scintillaria, The Watchers, white with death, the souls of those who have gone
The Constellations: ..... Groups of Scintillaria, bound by familial bonds.
The Zodiac: ..... The Thirteen, each representing one of the Great Clades of the Thaumaturges

Aurora Arcanus: ..... Skyfire from the arcane barrier that encircles the continent of Thaumatria.

...Astromancers gather at the newly constructed Star Island Observatory to study the heavens. Prior to its official opening, astromancers practiced their arts from the upper reaches of the Cathedral of the Redeemer, and from the observatory run by the University of Malazar. A number of nobles also field private observatories on their estates. Light pollution is a growing problem, and the University operates a second observatory on the heights of the hills to the north of the city.

The lensing technology used to produce telescopes has been in practice for only several decades, and the Star Island Observatory houses the largest telescope ever built. Spyglasses are available from several merchants near the military docks, and while they are very expensive their use has proven very advantageous as sea. 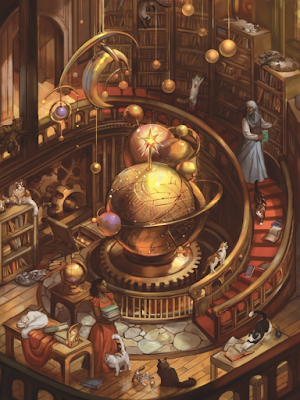 ORBITS OF THE PLANETS

The worlds of the Zul planetary system orbit their star in a pattern known as orbital resonance, with a ratio of 2:1. This makes predictions of conjuntions and alignments fairly straightforward.

The lack of a planet with a 4 year orbital period is a mystery to Astromancers.

Understanding the motions of the planets is vital to the prediction of eclipse events, for it is during these times that fell creatures appear, bringing death and ruin with them.

...A number of Malazar merchants place great importance on the visibility of Varca the Desire in the sky, claiming it holds great influence over the success of their endeavours. A brilliant golden light, it is sometimes visible in the hour after sunset or before the dawn and its sight is considered a blessing.

Matadors, cazadors, gladiators, soldiers and duelists hold the position of Garn the Fury important to their trade. A smouldering hunk of red that glares down from the skies, like Varca it too is only visible around dusk and dawn, though it will linger for much longer and is seen more often.

The Rings of Ui-garn trace a faint line of light across the night, and evenly divide the sky in two. Their position relevant to the stars does not change, but their angle and height slowly oscillates over the course of the year. In Malazar, vows sworn and contracts made during the months where Uigarn are highest are considered far more binding and strong.

Hri-nah the Shame is like a flickering flame in the night sky, and its presence implies failure for creative pursuits. In Malazar artisans, artists and builders have been known to refuse work or to halt projects for up to six and one months if the planet is present in their family constellation.

The first rising of Blue Shar-nah in the night sky is a time of consideration and contemplation, studying the choices and mistakes made of the last year, especially by leaders and politicians in Malazar. Decisions made after much consideration in the light of Blue Shar-nah are far more likely to be the correct choice. 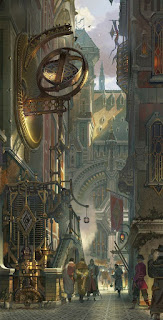 The small pale moon of Ridat also takes 28 days to orbit Arkha; its tidelocked to Arkha and always shows the same side towards the planet.

The large silver moon of Lumin takes 91 days to orbit Arkha, and each day on Lumin lasts 13 Arkhan days.

Most Thaumatrian cultures use a week consisting of 6 and 1 days, with work being conducted on each day save the last, which is a day of religious observances and rest.

...Chronomancers — a specialist field of Astromancy — are responsible for tracking time and informing the city of its daily progress. The Star Island Observatory has a time ball and bells that are activated on the hour every hour, and are used to calibrate navigation system and track hours of employ in the city’s factories. Chronomancers track the movement of the stars above to gauge their time pieces and citizenry often use notched time candles around the home to mark the passage of time.

Each solstice and equinox is a time for celebration, and the coming of the New Year is the greatest. Sacricarne — the day when the Gift of the Carcassara was received — is revered and rejoiced on the first day of spring, and the Founding of Malazar is acknowledged on the last day of autumn. Each event is celebrated with religous observances for the pious, and masquerades, music, parades, parties, and monstromaquias for the rest.

During the summer months the population escapes the heat of the day by returning home for siestas. Merchants and businesses open much earlier, shut for the middle of the day, reopen in the afternoon, and close much later in the evening. 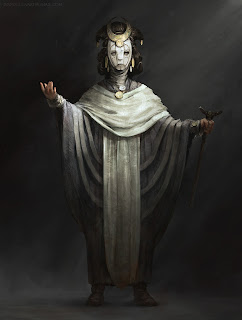 For those who live on Arkha:

Understanding and predicting the occurrence of eclipses is of vital importance: when an eclipse occurs, arcane portals open upon the surface of Arkha. Though these portals come terrible creatures from some alien planet or plane of existence, monsters that seek only to kill all they encounter.

Astromancers have become very skilled at predicting solar and lunar eclipses that involve Arkha’s moons of Lumin and Rindat, less so when eclipses involve one of the other planets. While they can warn when an eclipse will happen, they have yet to understand where on the surface the portals will open.

...Astromancers publish an almanac of celestial events and eclipses each year known as The Ecliptica, forewarning the populace of what to expect and when. During times of eclipse, the city shuts down the day prior to ready itself for the possibility of portals opening within the city borders. Curfews are established, allowing only those on military or official business permission to travel. State-sanctioned cazadors sweep the city, hunting down ecliptids to capture for the arenas. It is a time of tension, and if no portal appears that tension is released at the end of the eclipse with impromptu celebrations. The city reopens the following morning, and life carries on... 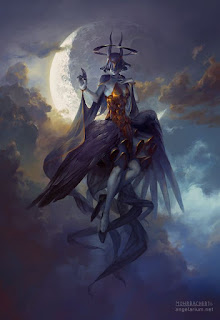 CLICK HERE TO GO TO NEXT THAUMATRIA BLOGPOST
Posted by Jez at 12:13 AM