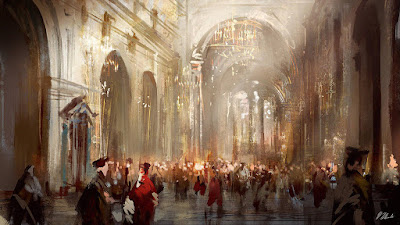 I previewed some of this last week; here's the complete list of languages spoken on the Thaumatrian Continent.

Thaumatrian:
As the official language of the Thuamatrian Empire, it is used in almost every region of the continent. It originated within the Thaum Clade of the hero Verlauha, and its alphabet has been appropriated by most other human languages. It is used in the twin Empires of Thaum, Xylano, The Corbando, Estrello, and the Citadel.

Malazari:
A distinct regional Clade-born language used in Malazar that incorporates much of the vocabulary of Thaumatrian. Passionately spoken, vibrant, with distinct sibilants and trills.

Carnigan:
A distinct regional Clade-born language used in Carniga and Carniga Verdad that incorporates much of the vocabulary of Thaumatrian. Forcefully delivered, somewhat harsh and powerful.

Vulg:
A distinct regional Clade-born language used in Vulg, Klulsatra and the Vulgo Venganza that incorporates much of the vocabulary of Thaumatrian. Very rounded sounds, using lips to full effect to give each syllable a sonic journey and punctuated with flicks of the tongue.

Luzori:
A distinct regional Clade-born language used in Luzori and Rahadu that incorporates much of the vocabulary of Thaumatrian. Complicated intricacies and harmonics are used to give this a very melodious and shrill speech.

Arkharni:
The origins of this language are unclear, though some claim it is the original language used by the Arkharnen deities when they shared The Garden with humans and taught them all they know. Slow and sonorous in its delivery, many of its sounds are onomatopoeic representations of the natural world. Its written form is very slow to produce, relying on cultivation of natural forms into symbolic shapes. It is most commonly used in Arkhanya and the Lumin Concessions.

Canti:
Criminal groups use their own slang and symbols to convey covert meanings.

Bruxi:
The grinding, chittering language used by the Bruxi. Humans and Mogs are capable of clumsy attempts at speaking it but it is relatively easy to understand. It is currently developing its own written form based on gnaw marks and scratches.

The Forked Tongue:
A melange of True Gorgon and Thaumatrian that both humans and gorgons are capable of expressing, born from the slave pits of the Viperium. It uses a hybrid of Thaumatrian alphabet and the shapes of True Gorgon heat-glyphs to give it its own unique written form.

Jugger:
The hideous speech of the Jugger Behem; a deep and terrible cacophony of animalistic screams and howls that also incorporates blood-letting for emphasis. It has no written form, though the blood-letting does convey different meaning by location on the body.

Moggi:
A sensuous language that requires body contact to fully express subtle nuances. It has no fixed written form, stealing from local alphabets to convey any written concepts. Licking, growling, purring and nipping are all part of the language.

True Gorgon:
A complicated combination of sounds and heat that only gorgons and their reptilian brethren can properly sense. Masterful control of fire is used to create simmering heat-glyphs that may qualify as a symbolic language.

Tylluani:
The cries and calls of bird songs, as spoken by the owl-like Tylluan. A very difficult language for others to learn to speak, though they can learn to understand. An alphabet born from gouges and claw cuts is used to convey simpler messages, but the more advanced concepts have no written equivalent.

...Malazari is by far the most widely used language, known by almost all. Official state documents and edicts still make use of Thaumatrian, but this is considered an archaic custom by most.

Bruxi, Moggi, and Tylluani are common in the ghettos, and the local Gutterspit and Canti are peppered with words borrowed from all three languages. Shanti is widely spoken in the docks and harbours.

Given the nation’s close proximity to the Gorgon Conquests, it is possible to learn the Forked Tongue from experienced mariners and soldiers.

Other languages are taught at various schools, the most popular being Carnigan due to its position on the northern border, and of course the various occupational jargons are taught as part of trade apprentices and service.
CLICK HERE TO GO TO NEXT THAUMATRIA BLOGPOST
Posted by Jez at 11:40 PM