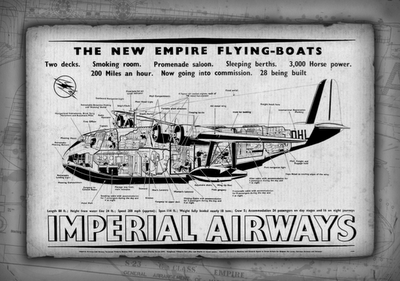 The Empire Flying Boat was the mainstay of the Imperial Airways fleet from 1936-47, traversing the globe from London to Australia via India, and making the trans-Atlantic journey to New York and Bermuda. Their time was short but glorious, and I always wanted them in my Hollow Earth Expedition campaign, as the "Millenium Falcon" of the setting. In and out of anywhere, flying dangerous missions for Empire during the war, shuttling dilettantes and precious cargo around the world.

For my players I gave them a handout of the ship - photos and stats -  and gave them surveillance of the factory in Rochester, UK, where they were built. Their first mission in my HEX game? Steal one.